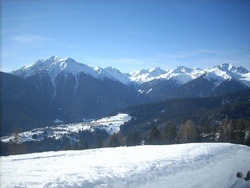 Trekking does not mean traveling quickly and distractedly through the environments, but, on the contrary, it is a way to grasp the truest aspects of the mountain, savoring its spaces, the wind, the colors ...

The paths to the Maddalene in Val di Non are well signposted, so all you have to do is wear your hiking shoes, put your backpack on your back, bring a map and set off for the Maddalene trekking. Several guides and maps of the area are available, which can refine the information baggage. The hiker is the expression of intelligent tourism, curious about the small achievements obtained step by step and eager for simple emotions.

Reaching the top of a mountain at the end of a nice walk is an exciting moment of relaxation in an oasis of tranquility and freshness, in a pure and direct relationship with the Maddalene, to experience the dimension of silence in a profound way. The possible and recommended itineraries in Val di Non are endless, from the most demanding and tiring excursions to shorter but no less engaging walks. Everyone can choose the type of exploration that suits them best and fascinates them.

The Maddalene chain is crossed by two important itineraries: the Bonacossa path that from Passo Palade reaches the Valle di Rabbi and a stage of the Sentiero Italia.

Access: Traveling on the Brenner motorway (A 22), exit at the S. Michele all'Adige tollbooth and taking the Val di Non direction, you will arrive in Cles in about 30 minutes. Then continuing in the Maddalene area, towards the towns of Bresimo, Cis, Livo, Rumo, Cagno ', Revo' and Romallo. By train you go down to Mezzocorona, then by train to Cles and then by bus to the various towns.

The S. Vili path is a long path, opened in 1988 by the SAT (Società Alpinisti Tridentini), which goes from Trento to Madonna di Campiglio for a total of almost one hundred kilometers, logistically divided into six stages, each of which already constitutes for itself a complete and satisfying excursion. S. Vili means S. Vigilio in the ancient diction of the people of Trentino and in fact the path reproduces the path followed by the saint who first, in 400 AD, faced the paths and mountain roads in his work of evangelization. S. Vigilio is a well-known character throughout Trentino-Alto Adige and as a testimony of his passage and the popular devotion that followed, there are churches and chapels dedicated to him scattered in various locations. First of all the cathedral of Trento erected on the place of his burial.

Trekking of the thinking Christ

Welcome to the Trekking of the Thinking Christ where the path becomes a fantastic journey in the mind.
The Dolomites with the enrosadira and its thin air, the forests of the violins, the sunrises and sunsets, the easy paths, the memories of the Great War, the nature that seems to have stopped and finally there is Him, the Thinking Christ, in its Cathedral, Monte Castellazzo, a small peak that can enchant even those who have lived a whole life in the mountains.

An ambitious project to transform the Trekking of the Thinking Christ into a Brain Walking gym, where you can think, ask yourself questions and find the answers, sit immersed in the sunset next to the Thinking Christ to understand how small the man is and how immense he is. universe.

The Trekking del Cristo Pensante was born under the patronage of Trentino, the Paneveggio-Pale di San Martino Natural Park, the Tourist Offices of Primiero, San Martino di Castrozza, Vanoi and the Valle di Fiemme and the Municipality of Tonadico and others municipalities of Primiero.
The journey has always been a stimulus to think and on the path of the Trekking of the Thinking Christ your thoughts will merge with His thoughts in a crescendo of questions that will bring you near the tip where you can sit next to Him. 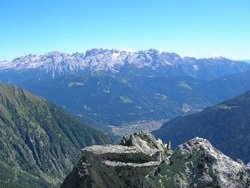 The "Brenta Dolomites Trek" was officially inaugurated in summer 2009, a brand new trekking itinerary designed around the Brenta Dolomites Group and immersed in the heart of one of the wildest and most authentic natural parks in Italy: the Adamello Natural Park. Brenta.

The “Dolomiti di Brenta Trek” (DBT) is a ring track dedicated to hiking that embraces the Brenta Group as broadly as possible. It is aimed at two different target walkers.

The "expert" route is designed for hikers who are connoisseurs of the peaks and are well trained, for those who want to experience the mountains to 100% and want to try the experience of staying in a refuge at high altitude, while the "country" route, it is dedicated to families, to those who love to savor the sweetest mountain and walk without giving up the convenience of resting between comfortable sheets after returning from the excursion.

Great news that “Dolomiti di Brenta Trek” proposes concerns the hospitality side. Being designed as an itinerary to be completed over several days, it also offers the possibility of experiencing the magic of a night spent at high altitude in one of the tidy alpine refuges or in a high altitude hut where you can also enjoy all the flavor. of the Trentino food and wine tradition.

The website dedicated to the itinerary will soon be online www.dolomitibrentatrek.it from which it will be possible to download all the technical info to move in peace: maps, altimeters, gps tracks and all the contact details of the accommodation facilities affiliated to the project that offer a hospitality dedicated and suitable for hikers.

The Path of Peace 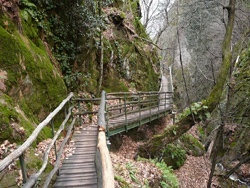 The Path of Peace is a tourist-hiking route with an important historical memory.
It winds for over 450 kilometers along paths, forest roads, trenches and walkways that connect the Stelvio to the Marmolada, retracing the front line of the First World War.

It is an itinerary rich in environmental motivations, but above all with a profound cultural and historical significance: a journey through memories, to reflect and meditate.

It can be covered by a normal hiker in 28-30 days, but of course only a part can be covered.
This long journey ends by crossing the easternmost part of the Lagorai chain (Colbricon, Paneveggio) to the Marmolada.
The path also includes variants that can be traveled in one day that reach particular war testimonies of considerable value.

Arriving in Val di Fiemme from Valle dell'Adige and after passing the San Lugano Pass, the Cimon di Val Moena rises imposingly on the horizon. To its right, the suggestive Val Cadino, famous for the splendid fir forests that climb the northern flanks of the Lagorai, climbs towards Passo Manghen (2047 m), which marks the watershed with the Valsugana. The first stage of the Trekking delle Legende (TdL) starts from the Manghen.

From the Manghen Hütte hut, follow the path 322A. After passing some rocky slabs dominated by splendid specimens of stone pine, including the skeletonized trunk of the Eternal, estimated to be at least 1000 years old, in just over half an hour you reach Lake Buse, framed by the northern side of the Mount Ziolera. Along this rocky wall on a slight slope, and then the Pala del Becco, the signpost 322A (then 322), reaches the Forcella di Montalon (2133 m) and from here a long traverse halfway up the northern side of Montalon, with a splendid view of the Lago delle Stellune, arrives near Forcella di Val Sorda (2256 m).

A short descent leads to the shores of the cobalt blue mirror of the lake, then the path marked 317 climbs steeply towards Forcella di Val Moena (2294 m). From here an infinite descent along the Val Moena (in July the eastern side of the Cimon di Val Moena is tinged with an extraordinary blood red color due to the flowering of the rhododendrons), allows you to return to Cavalese. Otherwise, you can follow the itinerary of the outward journey in the opposite direction to return to Passo Manghen.

Trekking of the Forts

The Trekking dei Forti allows you to visit the seven Austro-Hungarian fortresses of the Plateaus of Folgaria, Lavarone and Luserna (war 1915 - 18), among which, for interest, the Fort Geshwent Belvedere museum in Lavarone stands out.
Structured over about 70 km in length (which can be covered in 5 days), it therefore allows a visit to the Austro-Hungarian forts of Dosso del Sommo (Werk Serrada), Sommo alto, Cherle, Lusern, Busa Verle and Cima Vézzena.

It is also possible to visit the military cemeteries of Folgaria, Costalta and Slaghenaufi, the optical connection station of Monte Rust, the mysterious Scala dell'Imperatore and the remains of what was once the tactical sector command built in the deep Virti gorge. Trekking offers wide views of the surrounding mountain ranges.

On the paths of the Great War

An easy and spectacular walk on the paths of the Great War, in the shadow of Monte Cauriol. From the refuge of the same name, at 1587 meters above sea level, a steep and tiring climb (trail sign 349) climbs through debris and vertical meadows up to Forcella Coldosè (2182 m), to overlook a splendid amphitheater dotted with some of the most beautiful lakes in the whole Lagorai chain.

From the saddle the path descends towards Lago delle Trote (2110 m); a short detour to the south leads in a few minutes to Lago Brutto and retracing your steps, take trail 339 to the right which, crossing Lake Moregna at high altitude, then descends towards the grassy plateau where Malga di Valmaggiore rises (1620 m) . From here, a dirt road descends to Predazzo.