It is the journey that makes you rediscover the flavors and landscapes of the Fassa, Fiemme and Primiero Dolomites

The places to visit are the Valle di Fassa, Valle di Fiemme and Primiero. Each territory offers you delicious products: in Val di Fassa the famous “ puzzone di Moena ” awaits you, in Val di Fiemme goat ricotta and the famous Caprino di Cavalese , in Primiero Tosela and butter. All products, from cheese to honey, retain the flavor of mountain pastures and places still untouched.

A journey… in every sense 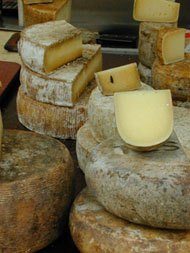 These are mythical places set among the Dolomites: a territory of great contrasts and beautiful landscapes, of rocky spiers, dense forests and wide meadows. The Cheese Route of the Dolomites that affects the Fassa, Fiemme and Primiero Valleys marks a path in the true heart of Trentino by slalom, as in a daring ski descent, one of the most beautiful features of this land.

The protagonists of the initiative are 72 members who, through the observance of certain quality standards, undertake to enhance the dairy products and other niche products that originate in the territory. A journey along the Strada dei Formaggi delle Dolomiti is not just a journey into taste, but a journey, in space and time, through the senses.

Thus we get to know the elegant Val di Fassa, cradle of the Ladin historical and cultural heritage, with cheeses such as Spretz Tsaorì , better known as the Puzzone di Moena, but also as the tasty Nostrano di Fassa produced in Campitello.

The nearby Val di Fiemme, land of the Magnificent Community of Fiemme, instead tells the history and tradition of well-known cheeses such as the Dolomites, the Fontàl, the Valfiemme, renowned as goat ricotta, but above all as the famous Caprino di Cavalese to be savored. , last but not least, with the excellent honey of these valleys.

Following the ascent towards Passo Rolle you will soon find yourself immersed in the Paneveggio - Pale di San Martino Natural Park, where nature tells us about its past through a rich program of initiatives for young and old. Then, crossing the Rolle Pass you arrive in Primiero: in the Nostrani, in the fresh and smoked ricotta, in the Tosèla and even in the butter, there is all the flavor of mountain huts and places still unspoiled like the nearby Vanoi Valley.

A journey through the emotions that arise from the encounter between your history and that of these magnificent lands to be savored slowly, in every time and place, to discover in the end that perhaps this is only the beginning.

Roads of Wine and Flavors of Trentino: Ötzi

Keep getting talked about! What's all this hype? It is more than 5,000 years old and in recent years everyone has been talking about it, not only in Tyrol, but all over the world: it is Ötzi, the ice man .

Ötzi, the Iceman, is probably the only mummy on earth to boast a museum of its own. The Ötzi museum, in Bozen / Bolzano, has become, since 1998, the home of the ice man who is more than 5,000 years old, the oldest human mummy on earth. Thousands of visitors come to see the Iceman every year.

But that is not all. They also have the opportunity to find out how he was found, how he lived and what he ate. His tools, his weapons and his beautiful fur coat are just a few examples of the objects that can be admired.

Ötzi's story has not yet come to its conclusion. Since its discovery in the Ötztaler Alps in 1991, a new discovery by scientists every year has created a stir within the entire archaeological world. Little by little, scientists are putting together the puzzle concerning the life and death of the "Frozen Fritz".

Recently, a scientist discovered that the Iceman was killed by an arrow shot behind him, following the discovery of an arrowhead in his shoulder. Who was this man? The story continues..