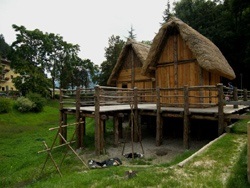 At the pile-dwelling site of Fiavè it is possible to recall and admire testimonies of daily life of more than 4000 years ago, an archaeological site among the most important in all of Europe. On the shores of the ancient Lake Carera we find the pile-dwelling site of Fiavé which is of particular interest from a cultural point of view since many elements of daily life have been found, tools of common use that once used the populations who lived in these settlements .

Thanks to the change of the lake into a peat bog, the pile-dwelling fabric has been well preserved over the years but also the many objects present that have made this area a unique archaeological area and one of the most important in all of Europe.

The archaeological site dates back to 2300 BC, thanks to the excavations and numerous researches begun since the 1960s and which still continue today, it was possible to reconstruct the history of the village probably abandoned due to a devastating fire and subsequently rebuilt about a hundred meters above sea level. distance near the Gustunacci hill. 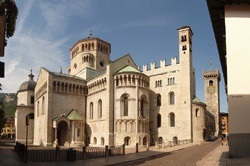 The Cathedral of Trento, the cathedral of S. Vigilio, was built in the area where an ancient temple once stood in honor of the patron saint of the city. Most likely, even before the saint's death there was a small church built on the basis of the Po Valley example. The work of the chair was started in the 11th by the prince-bishop Uldaric II, the same cathedral that was demolished almost entirely in 1212 to make room for the construction of the new Romanesque-Lombard cathedral at the behest of Federico Vanga, one of the figures who all contributed better to the urban-artistic growth of the city. The project of the new cathedral was entrusted by the bishop to the guidance of Adamo d'Arogno.

The northern transept, towards the end of the thirteenth century, was decorated with the addition of a rose window called the Wheel of Fortune, moreover a century later expansion works were carried out with the addition of Gothic elements. Thanks to the intervention of Giuseppe Alberti, in 1628, the Chapel of the Crucifix was built, with a Baroque layout that includes a series of wooden sculptures at the foot of which the decrees of the Council of Trent were promulgated between 1545 and 1563.

In fact, the sessions of the great assembly took place in the presbytery of the same cathedral, on a mobile structure made of wood built above the underground crypt. The decorations of the rose window are mainly of medieval style placed on the facade that protrudes on the side of the square. The apse area retains a particular set of decorations and shapes, moreover the rampant internal lateral stairs are unusual, made using the thickness of the walls that rise in the direction of the bell towers and the facade.

In the underground archaeological environment of Sass, in Piazza Cesare Battisti, in the heart of Trento, it is possible to visit more than 1,700 square meters of the Roman city found following the archaeological excavations carried out for the restoration and enlargement of the Teatro Sociale. It is possible to observe an extended stretch of the eastern wall, but also some sectors of houses where remains of mosaics were found, a long stretch of the paved road wall and workshops and artisan courtyards.

Thanks to the "splendi dum municipium", as indicated by the emperor Claudius the Ancient Tridentum, it has been possible to reconstruct the historical sequence never interrupted more than 2000 years ago, in practice from its foundation to the present day. In the same area there are two structures of the Roman period in the late ancient and early medieval phases, but also the Renaissance palace, the medieval quarter, the contemporary and nineteenth-century theater.