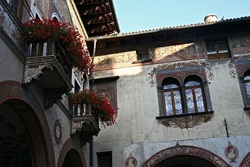 Palazzo del Ben is today the seat of the Savings Foundation of Trento and Rovereto of a Renaissance style, which always welcomes cultural initiatives. Today the building has a Renaissance mold, particularly interesting for the decorations with other artistic value. At first it was the private residence of the Dal Ben family, the structure was enlarged by the Counts of Arco in the 16th century. In the seventeenth century it was renovated and purchased by the Clarisse nuns of S. Carlo and later became the property of the Municipality of Rovereto.

In the years between 1877 and 1904 it was used as a post office, later sold to the Cassa di Risparmio di Trento and Rovereto. Palazzo del Ben is also the seat of the Roveretane degli Agiati Academy, some of its rooms are now open to the public to host cultural events.

The current architectural appearance was created and designed by the architect Augusto Sezanne in 1906, through the transformation of the original eighteenth-century block into a small Renaissance-style Venetian-style building. The paintings present represent the seasons while the vaults are decorated with pomegranates and festoons. Particularly interesting is the staircase that leads to the upper floors where the coffered ceilings are particularly decorated.

It is advisable to contact the Foundation Offices for information on the possibility of visiting the Palace. 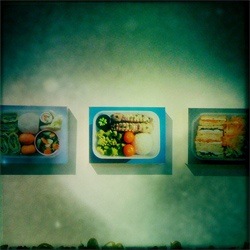 An important testimony in industrial archeology is the hydroelectric plant of Fies, which has become an art factory but also a center for the promotion and dissemination of culture. It was built in the early twentieth century, a part is still functional, starting from 2002 it has been transformed into a large laboratory for all lovers of theater, communication and cinema and, in general, of the performing arts. The goal is to become one of the major reference points for contemporary culture not only for the province of Trento but for all of Italy.

Well-known personalities from the world of theater stage many shows created specifically for the Centrale, performances that also alternate moments of dance performances and poetry readings. The structure is located within a natural context of great value, near the bank of the Sarca river and circumscribed by the Marocche landslide, it is a power plant a few kilometers from Dro one of the most important attestations of industrial archeology in the whole region, which has transformed itself from an electricity factory into an art and culture factory.

Thanks to the close collaboration with Enel, three projects are underway. First of all the residences of emerging artists and the creation of a system that takes care in particular of the phases of a specific work starting from the design to the vision and co-production of always new projects and national and international shows in collaboration with important European references. .

It is advisable to contact the Fies Central Offices for information on the possibility of visiting the site. 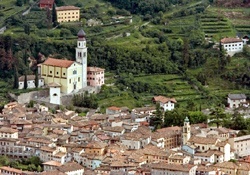 The Piano Museum today is located in the sumptuous Baroque palaces of Ala, where Mozart was once hosted by the Pizzini brothers. The history of these palaces recalls the period of silk and velvets, in fact their history dates back to 1630 when the family that descended from Odorico di Castel Pizzino, favored by the good trend of the textile business, went through a period of great splendor. which gave birth to the project of the two palaces.

The first building was built for personal use and, later, the construction of the second building for guests, facing each other in via Santa Caterina. At first the buildings were in communication with each other, the main building, the oldest one, was donated to the Municipality of Ala by the Pizzini family, following some restoration interventions, today it hosts numerous exhibitions and temporary exhibitions and concerts.

On the first floor of the building we find the Piano Museum, a place where important instruments from the collection of the pianist Temenuschka Vesselinova have been kept. Many are the artists, nobles and sovereigns who have been hosted in these two palaces. In the oldest building WA Mozart was hosted more than once on the occasion of his travels in Italy, in particular the exceptional acoustics of the great hall should be emphasized.

Around the building there is a balustrade characterized by medallions, gilded mirrors, canvases, stuccos, allegorical frescoes made by A. Gresta. In the lower area of the building there is still the room where Napoleon Bonaparte slept between 3 and 4 September. In addition, the Palace also hosted in the eighteenth century, on the occasion of his long journey between Italy and Germany, the Tsar of Russia Nicholas I, the scà of Persia and Heinrich Heine.

It is advisable to contact the Cultural Activities Office of the Municipality of Ala to book visits.

Today it has become the G. Tartarotti Civic Library, the Palazzo dell'Annona is one of the most important booksellers in the whole region. It was built in 1772 with the function of the municipality's grain warehouse based on the design of the architect Ambrogio Rosmini. Later it became the seat of the Agricultural School and later an embroidery factory.

The first exhibition and the first wine fair took place in 1872, an event in which 113 exhibitors participated, but also 97 exhibitors for a bacological exhibition. Subsequently, the building also housed the Accademia degli Agiati and the Civic Museum, and the Palazzo dell'Annona is also part of the city's Cultural Center.

Starting from 1771 the building returned to the possessions of the city, it was renovated and decorated becoming the head of the new linear square on Corso Nuovo Grande, today Corso Angelo Bettini. Today it houses the G. Tartarotti Civic Library, inaugurated in 1764, following the purchase by the Municipality of a private book structure characterized by 2,400 volumes, today it has 350,000 books. The renovation was followed by the designers Mario Botta, Mart and Giulio Andreolli and the interior furnishings were followed by the architect Sandro Aita.

It is advisable to contact the Civic Library to book visits to the Spazio del Libro room. 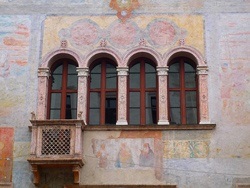 Palazzo Geremia houses the office of the First Citizen of Trento, a Gothic - Renaissance structure that hosts many cultural events. The palace was built at the end of the 15th century, today it is the seat of the mayor's office and is one of the most important monuments in Trento, the stage for many cultural events.

It has a Renaissance structure, with interiors that follow the canons of the late Gothic style, witnessing the transition between these two styles that have united Lombard and Venetian traditions over time. It was built at the behest of Giovanni Antonio Pona, also called Geremia, a citizen of Trento who made use of local workers.

Following the death of the family, in the first half of the nineteenth century, it was the seat of the social club where all the most important exponents of citizenship were registered. It became the property of the municipality in 1912 and the seat of the Banca d'Italia del Trentino. Later it was used by the Superintendency of Studies and the Municipal Police Command until it was completely restored.

In the same period, frescoes of the interior and of the facade were found. Thanks to the intervention of the restorations, paintings hitherto unknown were brought to light. The building was reopened in 1993 and became the representative office of the Municipality of Trento.

It is advisable to contact the URP of the Municipality of Trento for information on the possibility of visiting the Palace.

The only example of a fortification in the Val di Fassa, Torre di Pozza, was originally a summer residence of a Tyrolean aristocratic family, today it is privately owned. The only and only fortress present in the Val di Fassa, it was not under the protection of the bishopric of Trento but depended on that of Bressanone.

It is characterized by a tower with a quadrangular structure, equipped with imposing walls characterized by very narrow slits topped by a sloping roof. Based on recent restoration work, the structure has been lightened giving it a more sophisticated appearance. 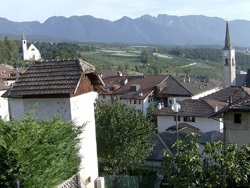 Jurisdictional seat of the fifteenth century, the Palazzo Nero is known in particular for the burning of witches. The name most likely derives from the color that formed on the walls as a result of the many fires started by the peasants who rioted in the fifteenth century. Its notoriety depends on the tragic fire that took place in 1614, in the square in front, where ten women were burned alive who at the time were accused of witchcraft.

Placed in a predominant position in the Val di Non, the Palazzo Nero is located near the center of Coredo, the seat of the Captains of the Val di Sole between the fifteenth and seventeenth centuries. It has a very ancient history in fact it was built in the fifteenth century by the will of Prince Bishop George II Hack as a jurisdictional seat.

Of particular importance is the Hall of Judgment, embellished thanks to the presence of numerous Gothic frescoes inspired by the Arthurian and Carolingian sagas, found in the early twentieth century, of particular note is the Story of Santa Genoveffa. Particularly relevant is the triumph of the queen of France who was unjustly accused of adultery.