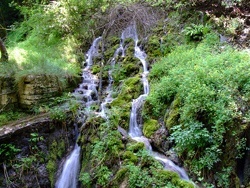 An enchanted place that was the inspiring muse for Thomas Mann in his "Enchanted Mountain", the Varone Waterfalls are located just three kilometers from Riva del Garda, formed by the descent downstream of the Magnone stream and the various underground losses of Lake Tenno.

They are characterized by a fall of more than 90 meters, have a strong tourist interest since 1847, the year in which they inspired Thomas Mann's "Enchanted Mountain" who spent a lot of time in the 1900s on holiday in these areas.

The water of the waterfall that falls into a 55-meter cone of rock, consists of a 73-meter gorge as a result of the force of the water. It is equipped with a series of ladders and balconies to allow a close view, inside the waterfall there are two caves, the first at the first runner and the second, also known as the upper cave, at the point where the water flows into the mountain.

It can only be reached after 115 steps and after passing the botanical garden. In addition, there is also a trout farm. 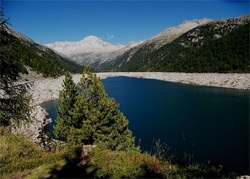 The Val Daone waterfalls are also known as the Crystal Walls, characterized by a path of ice water that forms near the numerous streams and streams, a period in which there is an intense cold that blocks everything, animals, trees and water. About 136 are calculated, particularly enchanting in summer which are a true enchantment of nature and in the winter months they are ideal for ice climbing.

They were discovered by a group of enthusiasts in the mid-1980s and have since become a reference point for ice climbers, full of water and waterfalls. In fact, over the years the entire valley has become the meeting place for a large number of enthusiasts who climb the waterfalls every winter and always discover new ones. In addition, the Ice Climbing World Cup took place in 2003, but many sporting events at national level are also held every year. 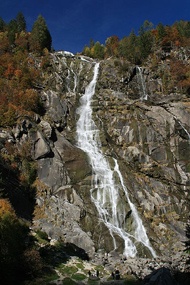 The Nardis waterfalls are among the best known in the Val di Genova, also known as the valley of the waterfalls thanks to the large presence of water jumps. In fact, the Nardis waterfalls start from Presanella up to a jump that from 921 meters continues over 130 with a slope of between 55 and 65 degrees.

The entire valley is made up of terraces and numerous excavations as a result of the work of water and the glacial formation that characterize the territory making it particularly rich in waterfalls. Thanks to the vaporization of the water with the impact of the rock and thanks to the particular position of the light at sunset, the waterfall will be particularly suggestive at any time.

It is possible to reach the Nardis waterfalls from the Nardis da Carisolo refuge. They extend over 130 meters surrounded by the wonderful mountains of the Adamello Brenta Natural Park.

It is advisable to contact the ApT and the Adamello Brenta Natural Park for information on the possibilities of accessing the falls.

A waterfall that leaves you breathless in summer and is particularly suggestive in winter, the Hofentòl waterfall is a leap into the water that enchants at any time of the year giving strong suggestion and great charm.

It is preserved in an extensive natural gorge and can be reached via a 15-minute path starting from the Guardia village, along a path that, after passing the forest of Gon, gives the possibility to reach Folgarida. It can be accessed both in summer and in winter, months in which the frozen nature is embellished by a path of lights that appears along the frozen waters.

It is advisable to contact the ApT Folgaria, Lavarone and Luserna for information on the possibilities of visiting and for updates on scheduled events. 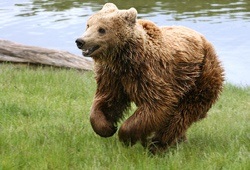 A wildlife area that is in close contact with the brown bear, in fact the Spormaggiore Wildlife Area is equipped to host brown bears and to spread the dissemination activity of the Museum of the local brown bear fauna. Located near Spormaggiore, 7 km from Andalo, it extends over 7,000 square meters near Castel Belfort.

An area particularly suitable for the life, even in optimal conditions of captivity, of European brown bears. The area was inaugurated in 1994, characterized by a forest of silver firs and beeches with a particularly abundant, herbaceous and shrubby undergrowth. The area is crossed by a stream that gives life to small natural waterfalls circumscribed by a fence built to ensure the safety of man.

There is also an area with numerous dens for the shelter and wintering of bears. Thanks to a closed circuit system equipped with infrared cameras, it is possible to monitor the behavior of bears while resting. 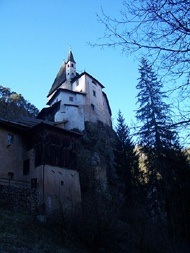 Surrounded by a series of overhanging walls, San Romedio is dominated by the Sanctuary. It is framed within the high and overhanging rocky walls, it presents at the bottom of the valley, near the homonymous river, an asphalted path that gives the possibility to reach the Sanctuary. The most interesting and compelling route is the walkway recovered above the old aqueduct dug into the rock.

The route has been subjected to safety interventions with mighty wooden parapets and has turned into a very suggestive pedestrian path that continues up to the sanctuary of San Romedio. In the vicinity of the sanctuary it is possible to see a faunal area managed by the Adamello Brenta Natural Park, equipped to host specimens of brown bears.