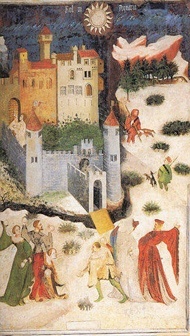 A power structure that was built on a rocky spur that overlooks the entire communication route towards the Giudicarie, the Stenico Castle was built more than 2000 years ago as a refuge for the Stoni, an Alpine population from which the town got its name.

The history of the castle is connected to that of the princes of Trento who held the administration of justice, according to the legend we learn that in the tower of Fame prisoners were left to starve, it is said that their souls appear during the nights of full moon. With the occupation of the Napoleonic troops, in the eighteenth century, the decline began. The castle, in 1829, was used for the offices of the Imperial Royal Judgment of the Valley at the behest of the Austrian State.

The first restoration works were started in 1910 and subsequently resumed in 1973 by the autonomous Province of Trento. It is possible to access the castle via a steep ramp that connects the village of Stenico to the square, the access is characterized by a main portal with vaulted arches which in the beginning had circular towers.

Particularly interesting are the frescoes in the main rooms, currently the castle is a well-known exhibition venue that hosts exhibitions, photography and contemporary art competitions, concerts and various events. There is also an important room dedicated to the archeology of local history, but also an exhibition of paintings, furniture, ancient tools and weapons part of the collection of the Castello del Buonconsiglio Museum of the city of Trento, a branch office.

It is advisable to contact the Stenico Castle for updates on visiting hours. 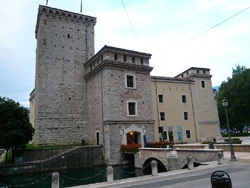 The stone or mortar walls, the four corner towers, the small entrance bridge over the canal that mirrors the gardens and trees of the Brolio characterize the Rocca. The profound restoration of recent years has served to bring to light some ancient structures and to give adequate space to the Municipal Museum, where important testimonies of local history, art and culture are preserved.

There are many testimonies from 1124, the year in which the local community acquired the authorization to build a castrum novum on the shores of Lake Garda. Later the Rocca was the emblem of military power, where the power of the prevailing lordships was applied. It is likely that the structure was enlarged at the behest of the Venetians and the Scaligeri, further modifications were applied on the occasion of the long period of domination by the bishops of Trento, in particular by Bernardo Clesio .

Based on the ancient illustrations, a different structure can be seen from the current one, characterized by a series of elements that are found up to the second half of the last century such as the corner towers, the double crenellated walls, rose and fruit gardens and fishmongers dealt with in Renaissance and Baroque chronicles.

Castel Campo exudes a strong castle charm but is also an important attestation of local history. The castle is located in the middle of a wood on the border of the Piana di Lomaso , a monumental complex characterized by two cylindrical corner towers that preserve a refined medieval courtyard.

It is possible that at first it was a community refuge based on its protected location but also adjacent to the communication routes between the external and internal Giudicarie. Undoubtedly, until 1190 it was the residence of the Campo, a very powerful family with tributaries and vassals in numerous parish churches, but also the owners of the Castles of Merlino and Toblino , which have now disappeared.

In the years of the conflict between the Venetians and the Milanese, precisely in 1423, Francesco di Campo coalesced with the Visigoths, determining the beginning of a very difficult period for the manor which was destroyed more than once and rebuilt. The castle was bought by the Trapps in 1496 and was the subject of numerous embellishment and expansion works.

During the nineteenth century it was completely rebuilt and significantly modified. The Rasini family, from Milan, bought the castle in 1920. From an architectural point of view it is particularly enchanting thanks to the presence of medieval and romantic style elements, with references to the Gothic style present especially in the halls.

Particularly enchanting is the internal courtyard, consisting of three orders of arcades, built in different periods, with five large arches in the portico supported by huge red stone columns, elements that were part of the previous structure of the fourteenth century.

It is advisable to contact the ApT Terme di Comano. 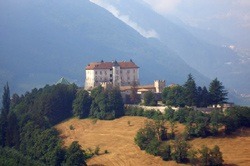 In a panoramic position in Vigo di Ton, Castel Thun is a splendid example of Trentino castle architecture. The symbol of the ancient splendor of one of the most powerful Trentino families, the castle dominates the Val di Non for its grandeur and beauty. It was built in the mid-13th century and was the home of the Thun family.

It has a Gothic-style civil-military structure circumscribed by a series of fortifications with a regular plan, characterized by bulwarks, lookout towers, lunate bastions and a moat. Particularly interesting is the Spanish Door, so named for the legendary journey of a young Thun in Spain, moreover it is protected by two turrets and is adorned with a suggestive ashlar. The castle was purchased in 1992 by the Autonomous Province of Trento, today it is the seat of the Castello del Buonconsiglio Museum .

Arriving at the castle, and after passing the first courtyard, you will find the access to the count's palace while, on the ground floor, there are the public rooms and on the first floor, once upon a time, there were the rooms of the lords. Particularly interesting are the Bishop's Room , completely covered in Cimbrian wood, once occupied by the Prince - Bishop Sigismondo Alfonso Thun , but also the Room of the Fireplace , consisting of a beautiful Renaissance fireplace.

In addition, the Room of the Dead, where it is still possible to observe on the walls the signs of the smoke of the candles that were lit during the funeral vigils. In addition, the chapel of the castle in honor and memory of St. George, houses a cycle of particularly interesting frescoes, of German origin from the fifteenth century. 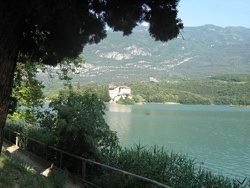 A wonderful castle that was born in the middle of the lake of Santa Massenza , one of the best known of all the castles in the region. Castel Toblino is particularly known for its particular position but also for the enchanting landscape that frames it. The castle is also famous for the numerous legends that circulate around the park and its walls, on the area occupied by the castle, which until a few years ago was a small island, where the level of the lake was more than two meters, about 2000 years ago it is said that fairies lived to whom, in the third century, a small temple was dedicated.

All this is attested by a plaque walled up near the portico of the castle that Paolo Orsi, a well-known archaeologist, indicates as the only one of its kind in the field of Roman epigraphy. The magical-religious idea was replaced by the military-strategic one and a fortress was born in an area of the temple, disputed for a long time by the local squires. The structure we admire today is the result of the rebuilding at the behest of Bernardo Clesio in the sixteenth century.

The manor castle was transformed into a residence much admired by the bishops of Trento, especially by the Madruzzo. In fact, Carlo Emanuele Madruzzo , the last of the prince bishops of this dynasty, is the protagonist of one of the bloodiest legends. It is said that the bishop was poisoned by his niece Filiberta and his brother Vittorio, and it is also believed that the mistress of the bishop prince was Claudia Particella, from whom the bishop had children.

The divine punishment was not long in coming in fact one evening Claudia and her brother crossed the lake to get to the castle but the boat capsized and the two boys died. During the nights of a full moon, the spirits of the two boys still roam the waters of the lake today. 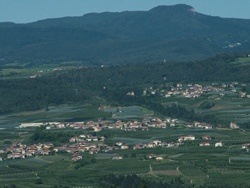 In fact, the structure still has elements in the castle style, especially in the imposing crenellated tower with a sloping roof and near the curtain, also this crenellated, of which only a few remains are visible today. The Bragherio or Bracherio di Coredo were the first of the owners who took it as a fief in the thirteenth century, a period in which it appeared only as a square tower on a clearing. Over the centuries it developed to occupy the entire square.

It was also the residence of the noble Concini and even today it is a private property. The ancient structure of the castle were distributed around the central square, consisting of a Venetian Gothic architecture with typical Nordic elements. In the western area of the square, the Bertoli and Gerio houses are created, embellished with refined portals, frescoes and Renaissance-style mullioned windows.

A little further on is the Casa de Concini, embellished with frescoes depicting sacred objects from the 18th century, as well as a statue made in 1741 probably by Pietro Antonio Barbacovi di Taio. Continuing the lower area of the place we can admire the Sarcletti House with a magnificent portal of 1526. Near the Gothic church in honor of S. Celestino we can admire a frescoed cycle "The Passion of Christ" of 1461 made by Maestro Leonardo da Bressanone, who worked also in the cloister of the Bressanone Cathedral.