Cuisine from the Fiemme and Fassa Valleys and the Cembra Valley 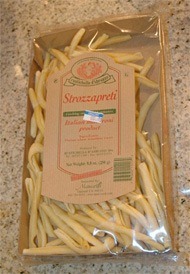 The cuisine of the Fiemme and Fassa valleys, but more generally of the Trentino valleys, is inextricably linked to the historical and cultural events that have characterized these lands in the past centuries as well as to the difficult geographical location.
The valleys enjoyed self-sufficiency due to the isolation that the geographical condition entailed. The subsistence was guaranteed by a flourishing agricultural and breeding activity.

The main crops were those of wheat, buckwheat, spelled, millet and sorghum, while the breeding guaranteed not only the meat, but also the milk thanks to which a varied dairy production was born. Following the Germanic influence, products such as potatoes and sauerkraut were introduced to the table of the Trentino people.

In desserts the use of poppy was widespread, which grew spontaneously or was cultivated, while the condiment was represented by butter, but even more by lard derived from pig breeding. The Fiemme and Fassa Valleys experienced, to a lesser extent than the rest of Trentino, a period of gastronomic decadence coinciding with the Austrian domination (1813-1918) due to duties on wheat, the advent of pellagra as well as natural disasters such as floods and cholera.

Trentino emerged from this difficult phase thanks to an economic recovery and the development of tourism, with which ancient culinary traditions have been rediscovered.

As has already been said, the breeding of cattle, fed with grasses from high mountain pastures, also guaranteed the presence on the tables of these valleys of excellent quality dairy products.

Among the most renowned cheeses we mention the Puzzone di Moena which owes its name to the strong smell that characterizes it, the Dolomiti soft cheese and the Nostrano produced mainly in the Val di Fassa characterized by a moist crust covered with a greasy patina, is often used in mountain cuisine for its original rich and tasty flavor.

Among the products obtained thanks to the meat of farmed animals we remember the speck (typical product of the whole Trentino) and the luganeghe which are sausages normally composed of pork (or beef), salt, pepper, allspice and garlic.

Typical foods of this area are also honey and berries. Honey is found in the most particular varieties such as that of rhododendron with a delicate flavor, that of white fir with a greenish black color with a sweet and aromatic flavor and that of fir characterized by a red color and a very pleasant flavor.

As for the berries, it can be said that they are so abundant in the two valleys that excellent jams such as blueberry jams are produced. 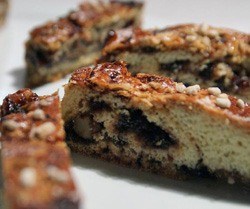 It is precisely due to the orographic configuration of the valley that Cembran cuisine can be defined as poor, but not without specialties that make it unique and special.

The Cembra Valley does not have many large flat plots and humus-rich hollows, therefore it is rather moderate in agricultural production. This situation has served to spur its inhabitants who since the past have come up with all the wits to make every corner of the land productive.

From here it can be deduced that the cuisine was rather poor and that, even in this area, the population of the Valley had to make the most of the few food resources available to them.
La Rostida, a dish made with potatoes boiled and roasted in ox fat, was served for breakfast instead of bread, while at dinner the Pinza, a savory pie prepared with the ingredients available from time to time in the pantry, was served.

Much richer were dishes such as Polenta and osei, Cunel or rabbit, roast chicken and El Tonco Lustro, a dish based on butter, tomato and flour that was flavored with various aromatic herbs that accompanied roasts and stewed meats. .

A typical and traditional dish of the Valley, still today, is the Salmistrada meat and the dried Luganega accompanied by the potato tortel.
The desserts were prepared only on special occasions, this is the case of the Grostoi, typical carnival sweets.

With the passage of time and with the consequent ease of movement, the cuisine of this area has been able to grasp the influences of Valsugana and the German-speaking area of nearby Alto Adige, influences that are still found in the preparation of dishes such as Canederli in Brodo and the Strangolapreti.

As already mentioned, in the past, this cuisine favored the use of beef and pork, while the dominant fats were butter, lard and pork lard.

It has a popular origin and is closely linked to local products. The preparation and cooking of food are determined by experience and have been handed down orally.

In recent years the traditional cuisine of the valley has undergone, in some of its parts, a revisitation in view of the variation of the taste and characteristics of the food.