The flavors of Trentino Alto Adige: Cuisine and Recipes of Bolzano

The province of Bolzano, that is Alto Adige, has, in general, a culture characterized by a strong Austrian influence, even more so than the nearby Trentino area, which obviously is also reflected in the local gastronomy. 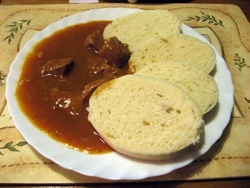 In South Tyrolean cuisine there are many strengths, from the many varieties of bread, to soups of many types, to the products obtained from the processing of meats, to cheeses, all have a common element: the absolutely genuine raw material coming from the same region.

Let's start with bread, as already mentioned, in South Tyrol there are several varieties of this essential element of South Tyrolean gastronomy, first of all the Schüttelbrot or "shaken bread".

This bread is particularly crunchy, it is called "shaken bread" for the processing that still follows the rules of the original production, that is the dough made of rye flour, water, yeast, salt and some spices is shaken and beaten with the hands, up to obtain the classic round and flat shape, and then baked in the oven.

The breads that can be tasted in the South Tyrolean territory are very special and qualify the gastronomy itself. You can find savory breads and sweet breads, breads whose dough includes fruit flakes or aromatic plants or, again, flavored with seeds such as those of poppy, fennel or cumin.

The main feature of almost all these breads is the use of unrefined flours of different types of grains such as rye, millet, corn and wheat. Soups are another fundamental element of South Tyrolean cuisine, in many homes they are served before the first course, as if to prepare the stomach to accommodate the rest of the courses.

The soups are prepared with vegetables of various kinds such as watercress, chanterelles, onion, but also nettle, cheeses and potatoes and smoked bacon. Other types of soups are, on the other hand, goulash and various soups with dumplings in broth, served as a first course as they are more nutritious.

Another very large chapter of South Tyrolean cuisine is made up of cheeses, there are an unspecified number of them throughout the territory.
The production of cheeses in Alto Adige is dictated not only by the presence of abundant raw materials, but also by the fact that the traditions in this sector have not been lost; even today, many of the South Tyrolean cheeses are produced using ancient methods rich in history.
Also in this case it is common to flavor the cheese with herbs made available by nature. Speaking of South Tyrolean gastronomy, one of the most representative foods of the region cannot be forgotten, namely speck.

Speck has been produced in the same way for generations, i.e. the pig's carcass is cut into half carcasses, which are deprived of the bones. The halves are then sprinkled with a mixture consisting of salt, pepper, mixtures of aromas, garlic, juniper berries, paprika and bay leaves. Each farmer can use a custom blend.

In addition to the half carcasses, only the thighs can be used. The meat is placed in a vat and left to salt for approx. 14 days. The pieces of meat are sprinkled daily with the exudate. After this period the meats are placed in the smokehouse. In the first days there is no smoking, which instead begins after a month with smoke obtained from juniper and wood shavings. At the same time, constant air circulation is guaranteed. After the smoking phase, we proceed to a seasoning phase with a minimum of 4 months.

Despite the importance of speck, other meat-based preparations cannot be forgotten, such as, for example, the many varieties of frankfurters. More or less large frankfurters are served both for breakfast and for a quick meal, they can also be bought in kiosks where they are prepared both boiled and roasted.

The typical South Tyrolean meat products also include those preparations of game, of which the territory is rich, such as deer sausage and chamois meat or sausage.

A separate chapter should be dedicated to Ladin cuisine.

If in South Tyrol a local cuisine has been rediscovered for some years, linked to territorial traditions, this is largely due to Val Badia; in fact numerous dishes, once on the agenda of the Ladin peasants' menu, are now considered specialties of South Tyrolean cuisine: "cajencí" (half-moons stuffed with spinach, or chard, and ricotta), "tutres" stuffed with sauerkraut or spinach , potato pasta sheets with sauerkraut and pressed, are just some of the typical first courses of Val Badia.

The origin of Canederli is very ancient, at least from the 16th century and, probably, the Bohemians were the first to consolidate the recipe that is still used throughout the Dolomites (in South Tyrol they are called Knödel, i.e. gnocchi), using as a basic ingredient lard or fat pork belly.

Then it was modified and made less 'greasy' by the people of Trentino on a particular occasion: the Council of Trent, when the most authoritative chefs in Europe met in order to make their stay pleasant, even as regards food. prelates of rank.

Soften the butter in a bowl and add the flour, eggs, milk, mixing everything well. Then add the chopped parsley, a sprinkling of nutmeg and salt.

Then prepare the dumplings by making balls with the mixture as big as walnuts and of the right consistency. Let them rest for about 30 minutes. Then boil them in abundant boiling broth and cook for about ¼ of an hour.