Health, beauty and relaxation at the Terme di Comano, between the Brenta Dolomites and Lake Garda 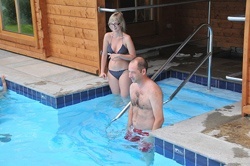 Between Lake Garda, the Brenta Dolomites and the Adamello Brenta Natural Park are the Terme di Comano, where holidays are characterized by tranquility and the pleasure of regenerating oneself in contact with green and seductive nature.

Known for the therapeutic virtues of the thermal waters, the area includes the three plateaus of Banale, Bleggio and Lomaso . Centrally located, the Terme di Comano are the right place to heal the body and free the mind. The spa, immersed in a centuries-old park, is particularly attentive to the needs of families and dedicates the special Comano Junior program to children.

In the ancient villages of the highlands, traditional rural activities are still handed down today. They are the Nature Villages and present their typical architecture in stone and wood, peasant houses, frescoed parish churches. With the Castle of Stenico , the pile-dwelling site of Fiavé , the Ecomuseum of Judicaria, divided into a series of theme parks, tell fascinating stories and bring them to life.

The area is a Slow Food presidium, which defends local flavors, such as ciuìga, the typical salami with a white turnip flavor, but here you can also taste organic vegetables, walnuts and mountain honey, special dairy products.

Those who want to keep fit, can choose to walk or mountain bike, among villages and castles, farms, huts and shelters; you can practice fishing, sport climbing, swimming in the pool, tennis, minigolf.

Wellness, nature and tradition at the Terme di Comano, between the Brenta Dolomites and Lake Garda

Between Lake Garda , the Brenta Dolomites and the Adamello Brenta Natural Park, at the confluence of the Banale, Bleggio and Lomaso plateaus, are the Terme di Comano, the perfect place to heal the body and detoxify the mind. In winter the spa section of the Grand Hotel is open and the whole resort comes alive for families and children.

In the ancient villages of the highlands, in the Nature Villages, local traditions are still lived. The ancient rural houses, the frescoed parish churches, the Stenico Castle and the pile-dwelling site of Fiavé, the entire area of the Ecomuseo della Judicaria tell of a past that is still intriguing.

It is possible to combine the pleasure of snow sports with thermal treatments: the Bolbeno slopes, particularly suitable for children, are very close by, and the ski areas of Andalo, Pinzolo and Madonna di Campiglio are reachable.