With snowshoes on the Cime di Canfredin

The celestial silences of Paganella 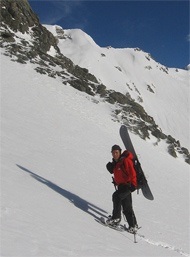 Snowshoes allow us in Paganella to discover the heavenly silences of the Cime di Canfedin, which await us there, around the corner, a stone's throw from the modern cable car that leads from Andalo to the top.

The summit horizon of Canfedin, the twin peak of Paganella, but isolated to the south, is an exciting discovery where moving with snowshoes becomes an easy conquest for everyone and within half a day you can reach truly enchanted places.

Arrived at the top station of the cable car, Dos Pelà at 1,772 m. of altitude, and put on the snowshoes, we start towards the south leaving the ski slopes on our right and go up towards the Malga Terlaga bending slightly to the left up to the San Antonio Pass, keeping upstream of the arrival of the homonymous chairlift.

A short descent of a few meters leads to the pass where clear signs show us the way which is still all visible.
First continue briefly on the right of the long ridge that slowly culminates in the Canfedin summit paying attention to the wild precipices that descend on the left; following the morphology of the mountain, the large panettone reassembles and proceeds safely to the top.

The spiers of the Brenta are so gigantic and close that it seems to touch them with one hand, while to the south it is all a degradation of reliefs that are lost on the horizon of Lake Garda. To the north, behind the Paganella peak, the peaks of Alto Adige, while to the east the peaks and forests of the Lagorai stand out mysteriously.

For the return you can follow the uphill track in the opposite direction.

NOTE: Not to be undertaken in case of fog or bad weather: just beyond the Passo di S. Antonio the isolation is total and the vastness of the undulating landscape requires absolute visibility.

Leave the car at the Passo Coe cross-country ski center car park, and follow the specially prepared track near the Passo Coe Refuge.

Gradually climb the slope and get up, on the open side, up to Bocchetta di Val Orsara (1730 m) at that point the route points east on a slight slope and downhill until you reach Malga Piovernetta (1630 m - panoramic point on the former NATO base of Passo Coe). From the malga you then return to Passo Coe, slightly lowering in altitude on a beaten path and cutting the slope diagonally.

Walks with Valsugana and Lagorai snowshoes

For experts or beginners, better in company, the Lagorai group is the right place to use snowshoes and have fun in the midst of nature. The itineraries are among the most panoramic in Valsugana and touch the fortresses of the First World War as well as the many mountain huts in the area.

Particularly suggestive are the outings in the moonlight, organized regularly and accompanied by alpine guides. The necessary equipment is minimal, only poles to be applied under the trekking shoes and poles, which can be rented by contacting the ski schools in the area, such as the Italian Ski School Lagorai.

From the car park opposite the Sanctuary (across the road), follow the beaten road which, passing by the House of the Little Sisters of the Holy Family, quickly leads into the woods, near the Ecken biotope (protected natural area equipped with illustrative and directional signs ).

Once in the vicinity of the biotope, continue along the forest road which enters a thick fir forest, which runs along the entire perimeter and returns to the open sky on the north side; you return to the Sanctuary from the east along a sunny path (trail no. 1), passing just downstream from the town of Colpi.

Access : From the Sanctuary of the Madonna delle Grazie (1250 m - 16th century), in Costa, 2 km from Folgaria on the road to Lavarone. The Sanctuary preserves the statue of the Madonna and Child (XV century) considered miraculous.

Walks with snowshoes are a very common activity in Trentino and are considered the winter version of summer trekking. There are no firmly defined paths for the practice of this sport, but you can take interesting walks following the tracks of the paths.

In the Trento area you can dedicate yourself to this activity on Monte Bondone: so you can walk appreciating nature, looking for the traces left by animals on the snow or a corner from which to enjoy the wonderful view of the Brenta Dolomites. Alpine guides are available for guided excursions.

The route follows the Nordic Walking path n ° 5. It starts from the small church of Magrè and uphill, passing near old huts, you enter an environment of particular beauty with wide meadows and wonderful views over the entire Lavarone plateau and Cima Vezzena. In gentle ups and downs you reach Monte Tablat (1380 m) and then slightly downhill you return to Magrè.
Access: Bro. Magrè (1285 m)

Leaving the car a few meters before the Stue Bridge near a capital, follow the forest road N ° 318 without any possibility of error, which remains to the left of the Stue stream. The road enters a beautiful spruce forest and after about 1 hour of walking you reach a clearing where the low Malga Stue rises at an altitude of 1400m. from where you can see the imposing peak of Montalon in the distance.

You always continue on the main road ignoring all the deviations and passing another hut (Stue alta) you arrive after a long walk to Malga Cazorga 1845 m (closed in winter) the final destination of our excursion. The effort is rewarded with a solitary environment of rare beauty, where the colossus of the Cima Stellune stands majestically on the head of the valley.

Cimbrian path of the imaginary

Historical-naturalistic path that affects the Luserna Plateau. The imaginary are the emotions and sensations that the route suggests to the tourist. It develops clockwise to the east of the built-up area between the wide pastures of the Malga Campo Refuge up to an altitude of 1520 m and the fir forests of cimbrica memory. The first section is all uphill and leads to loc. Hüttn / Baiti and then in the pastures of Malga Campo. You then go through a dense fir forest and after a flat stretch you go down towards the pastures east of Luserna and then go back down slightly.
Access: Luserna Piazza Battisti (1333 m)

Walk that takes place in the evening between dusk and night, you can admire the beautiful lights of the sunset, easy walk around San Martino.