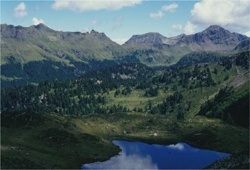 From Predazzo , an easy dirt road reaches, at an altitude of 1600 meters, the suggestive grassy plain of Valmaggiore, an ideal starting point to enter the heart of the Lagorai. A comfortable paved mule track, a reminder of the long war years of the First World War (trail marker 335), allows you to overcome the morainic ridges that lead to Forcella di Valmaggiore (2180 m), where the Paolo and Nicola Bivouac is located, perfect for a stop and equipped for overnight stays (if you don't have too heavy backpacks, bring some pieces of wood, always handy for a fire in the stove).

From the pass, path 349 runs along the entire northern slope of Cima di Cece , the highest elevation of the group. Reached the north ridge, hikers with steady and safe walking can reach, in just under an hour, the summit pyramid of Cima di Cece at an altitude of 2754 meters and descend on the east side, along traces of the path, to the underlying Forcella di Chickpea.

The path 349 instead reaches the same saddle (2393 m), always skirting the top. From the saddle, go back towards the Fiemme valley floor descending along path 336, passing the lakes of Caserina and Cece, arriving at Malga Campigolo and then the dirt road that leads back to the Valmaggiore bridge. For the center of Predazzo there is still an hour to travel left.

Two pearls in the green 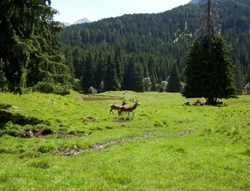 Paneveggio looks like a large clearing, at an altitude of 1500 meters, with an extraordinary view of the Lagorai, to the south, and the spectacular peaks of the Pale di San Martino, enhanced by the beak of Cimon della Pala , to the east. From the Pulesi car park, on the edge of the artificial lake of Forte Buso, the path 337 starts which leads with a very long climb, steep in the final part, up to Forcella Ceremana (2428 m), with a difference in height of almost a thousand meters.

From here, traces of the path to the east lead to Colbricon (2602 m), the last porphyry bulwark of the Lagorai overlooking the magnificence of the Pale, which can be admired in their fullness. The ascent to the top requires a minimum of experience, as there are no signs and only traces of passage are followed between rocks and porphyry cracks. The descent to Passo di Colbricon is also challenging for the same reason (you walk on unstable gravel), but still intuitive and logical.

Easier is the short stretch up to the Colbricon lakes (1927 m), where there is also the homonymous refuge, open in summer. Returning to Passo Colbricon, a clear path descends northwards through beautiful larch forests to Paneveggio. From the Colbricon lakes, those who choose to continue the Trekking delle Legende towards San Martino di Castrozza will take path 348 southwards which descends towards Malga Ces and from here to the main tourist center of Primiero.

The ancient cliffs of the Latemar

From Pampeago (1557 m), the western wall of the Latemar presents itself in all its grandeur and grandeur. Along the grassy mats of the ski slopes you reach the Ganischger Alm (2010 m), which can also be reached using the ski lifts, and then following the trail sign 504 and then the 516, the Passo Feudo (2121 m).

Among the ancient rocks of the Latemar, in an hour you can reach the Torre di Pisa Refuge (2691 m), overlooking the incredible eastern Latemar amphitheater, where the structure of the ancient marine barriers is immediately understandable and it is possible to imagine the immense lagoon tropical that in ancient times marked this environment.

From the refuge, path 516 reaches Forcella dei Camosci (2590 m) and then descends (trail sign 18), first between rocks and then among sparse groups of stone pines, up to the Oberholz chairlift, where it crosses trail 23, which to the left leads to Passo Pampeago (1990 m) and then reaches the Ganischger Alm again.

Between white and black

From Pampeago (1557 m), climbing along the grassy mats of the ski slopes, you first reach Passo Pampeago (1996 m), and from here you face the steep ascent, always on the track and without obligatory path, which leads to the top to the Pala di Santa (2488 m), a spectacular hillock over much of the Eastern Alps.

From the top, path 574 follows the western spur of the Pala di Santa and descends to the meadows that form the small plateau of Passo di Lavazè (1802 m). Passo di Pampeago can also be reached using the ski lifts up to Ganischger Alm (2010 m). From here, following the dirt road, you can reach the pass in a few minutes.

The Viel Dal Pan - From Passo Fedaia to Col Rodella 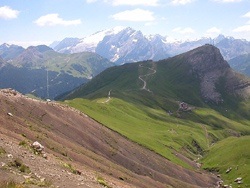 In front of the Castiglioni Refuge , take path 698, and then continue left on path 601, which with a long traverse in a spectacular setting, staying around 2400 m, leads to the Pordoi Pass (2239 m). This stretch of the itinerary is called “Il Viel del Pan”, because it seems to have been the preferred route for itinerant traders who moved between the Val di Fassa and the Livinallongo basin.

At Passo Pordoi it is worth taking the cable car up to Sass Pordoi, the terrace of the Dolomites, to enjoy a 360 ° panorama of all the main Dolomite peaks.

Returning to the Pordoi Pass by cable car, following path 627 you will arrive in Pecol, from where, along the same path or taking the cable car, you go down to Canazei. From here, for the walk along the stream, you reach the locality of Ischia in Campitello, where there is the departure station of the cable car that takes you to Col Rodella in a few minutes.

Towards Roda De Vael - from Rif. Gardeccia to Passo Costalunga 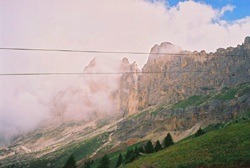 From the Gardeccia basin you reach Ciampedie (trail sign 540), from where you have a panoramic view of the entire Vajolet Valley. Continue to Prà Martin and then to the Troi de le Feide (Path of the Sheep) at the foot of the Cigolade. Once you reach the Buja de Vael , you go down to the Roda de Vael Refuge.

The soul of the Pale Mountains - From Rif. Antermoia to Rif. Gardeccia 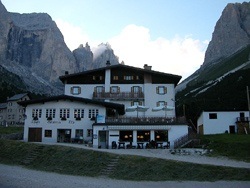 From the Antermoia Refuge , path 584 crosses the pass of the same name (2770 m), to then skirt the western side of the Catinaccio d'Antermoia up to the Passo and the Principe Refuge (2600 m). You can also get here with a spectacular via ferrata that crosses the massif, touching the top at an altitude of 3002 meters (only for experts with equipment).

Continue south on path 584, which after a first steep stretch, attenuates along the Val del Vajolet up to the Vajolet and Preuss refuges (2246 m), from which you can admire the legendary Vajolet Towers and the east face of the Catinaccio.

We are in the center of one of the most celebrated mountaineering areas of all time, where the pioneers of climbing, from Paul Preuss to Tita Piaz, have achieved legendary feats. From here, in about an hour's walk, you reach the Re Alberto I Refuge (trail sign 542), from which you can admire the southern slope of the Vajolet Towers . Returning to the Vajolet and Preuss huts, following path 546 you go down to the Gardeccia hut .