Eating in Val di Non and Val Rendena: the taste of Trentino

Apple (which has been given the protected designation of origin), for example, accompanies rice dishes, raw meat and is used in spinach and walnut salads.

The apple is obviously also widely used in the production of desserts, first of all the apple strudel , but also in the preparation of puff pastry bundles with poached apple, apple filled with custard, tart and apple pie.
Trentingrana (recently acquired denomination) is nothing more than Grana cheese produced in Trentino with the same technique used in the Parma area.

It is a semi-fat hard cheese, cooked at slow maturation, produced with milk from two daily milkings; it is eaten fresh in small pieces that enhance its qualities of taste and freshness or grated on first courses.

It is excellent tasted with fruit and in Val di Non it is also paired with the typical apples of the same Valley. The Val di Non boasts, however, also other preparations of which it is difficult not to mention including the Tortel di Patate . These are grated potato pancakes, combined with flour, salt and pepper and fried in abundant boiling oil until they are golden brown. 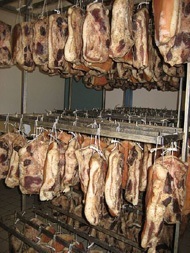 They are served together with local cold cuts or cheeses, cabbage or beans and onion. Also excellent with carne salada or lucanica pasta. As for meat-based preparations, Valle di Non, like all of Trentino, boasts a long tradition of typical products including luganeghe , speck , carne salada, smoked pancetta, cotechini and the very typical smoked mortandela .

Smoked mortandela is a traditional smoked cured meat typical of the Non Valley with a curious meatball shape and brown color. At one time it was the custom of every family to buy at the fair of the Saints in early November a pig from whose meat, after about a year, these meatballs, weighing about two ounces each, were produced. Today the production of this salami has greatly reduced, however you can find this excellent salami, still produced in the traditional way, at some artisan butchers.

Obtained exclusively from pork, including heart, throat and lungs, mortandela is excellent both raw and cooked in combination with polenta, potatoes or boiled field vegetables. Finally, the desserts, of which the Val di Non boasts a considerable variety.

Obviously the Strudel cannot be missing on the tables of Nonesi, as in all of Trentino, but the most traditional dessert of the valley is the Brezdel: a soft donut covered with sugar, originally from the town of Brez, it was the typical dessert of weddings of the past. Symbol and wish of prosperity it was custom of the spouses to offer it as a gift to the wedding guests.

Its name has a double origin. First of all, it recalls the habit with which the women of the village, returning from the market, carried the cake by putting it in the arm (in braz dialect).

Secondly, it would recall the day (Brez day) in which the emigrants of Brez in the United States gathered together to remember their homeland by consuming this typical dessert.

Very soft and with a delicate flavor, Brezdel , still produced today in the Brez bakery, is excellent above all when still warm, fresh from the oven, especially at breakfast.

In the current gastronomy of Val Rendena it is possible to identify what the gastronomy of this Valley was in the past.
The production processes of cheeses and cured meats have remained practically unchanged. 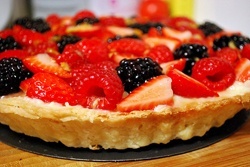 The production techniques of cured meats are still those handed down since 1800 when the farmers of Strembo, Caderzone, Giustino , emigrated during the months of winter to the plains, in particular in the Mantua area, where, working as "mazzin" (slaughterers ) or as apprentices at local butchers, they learned the art of producing sausages.

First of all, the famous garlic salami: garlic was and remains the secret of the salumai rendeneri of yesterday and today, in giving the sausages a particular aroma.

The garlic salami is a pure pork sausage, to produce it the local butchers use only the chosen pulp, obtained from animals reared in an absolutely natural way.

With the same raw material, but with a different stuffing technique, the hunter-type garlic sausages are produced. Another typical salami of Val Rendena is the garlic Salamella for the preparation of which are used those cuts that do not enter the preparation of salami. Also from pork, the Rendeva cured meats also make excellent cotechini, flavored lard, mortandele, pork meatballs mixed with liver together with various spices and local garlic bacon.

The agro-pastoral tradition of Rendena, on the other hand, is even older, where each community has its own pasture and the grazing area is managed through the very ancient organizations (dating back to 1300) of the Rules and Civic Uses according to criteria that allowed the natural renewal of resources.

Another typical product is linked to this tradition, the Spressa, one of the oldest cheeses of the Trentino mountains, which comes from a dairy art that has ancient roots, even today the result of absolutely artisanal processes, based on a raw material, milk which derives from animals raised exclusively with mountain hay, those of the famous Rendena breed.

La Spressa is a low-fat cheese because in the past the farmers deliberately leaned the milk in order to obtain the greatest quantity of butter. This cheese is obtained by using the milk from two successive milkings which is subsequently left to surface. The paste is straw yellow in color with scattered medium-sized holes. A proof of its authentically handcrafted workmanship is given by the external appearance of the shape which often presents anomalies on the rind.

The production of Spressa is concentrated in particular in Giustino near Pinzolo where the main social dairy of the valley is based and where excellent Trentino wheat is also produced in the months of autumn and winter.

Another gastronomic emblem of the Valley is the square Speck which is obtained from the pig's back properly seasoned and spiced. The square or rectangular pieces of meat are smoked for a few days using beech shavings combined with juniper berry branches.

Also with regard to desserts, Val Rendena boasts a long tradition, among the most typical desserts we find the Strudel, the Tarts with berries , the Fregoloti cake and the carrot cake.