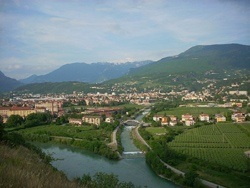 Vallagarina is a very welcoming area, characterized by rolling hills covered with vines, a landscape with an exquisitely Italic atmosphere. In this area south of Trentino excellent vines are grown, first of all the noble Marzemino, with its ruby red color and intense flavor.

Here nature offers the visitor still unspoiled corners, such as Monte Baldo, which stretches between the Adige Valley and Lake Garda.
On the western side of this mountain we find the tourist area of Brentonico, a starting point for scenic walks and a ski area close at hand.

Alongside nature, Vallagarina also boasts a precious historical and cultural heritage: crossing it you can admire numerous castles such as those of Sabbionara d'Avio and Castel Beseno.
In Rovereto there is also the Mart, the Museum of Modern and Contemporary Art of Trento and Rovereto.
Not far from the main roads, the Gresta Valley is also worth a visit, famous for being the organic vegetable garden of Trentino. 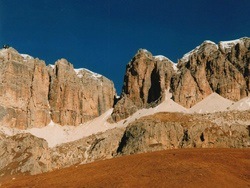 On their territory there are the Dolomite groups of the Catinaccio with the Towers of the Vajolet, the Sella, the Marmolada, the Latemar, recently declared a World Heritage Site by UNESCO.
The landscape is characterized by splendid peaks and a vast wooded heritage.

The Val di Fiemme is also crossed by the wild Lagorai chain, with mountains dotted with alpine lakes and extensive areas of grass and pasture, which testify to the existence of an important livestock activity. The numerous stables during the winter months house the cattle, which in the summer move to the mountain pastures.

Moving on the eastern side of the Val di Fiemme you arrive at Passo Rolle, beyond which opens the area of Primiero and the Vanoi Valley, the eastern edge of Trentino.
Among the most beautiful peaks the magnificent Pale di San Martino. Much of this territory can boast a wild environment, protected within the Paneveggio Pale di San Martino Natural Park.

Valsugana extends on the eastern side of Trentino. The Alta Valsugana, next to the two lakes of Levico and Caldonazzo, an ideal destination for water sports enthusiasts, offers the important spas of Levico and Roncegno, fed with ferruginous-arsenical waters with important therapeutic properties. 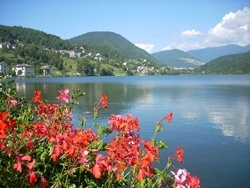 On the northern wall extend the Valle dei Mocheni, an ideal destination for those who want to discover some of the oldest traditions of Trentino (the population still uses its ancient German language), and the Piné Plateau, with the lakes of Serraia and Piazze. .

The Tesino and the Eastern Valsugana are, on the other hand, united by a still uncontaminated natural landscape, scattered with medieval castles and caves. Located on the orographic right of the Valsugana, the Val di Sella also offers a small natural paradise: among these woods there is the Biennale di Arte Sella, a very original permanent exhibition of works made with natural elements.