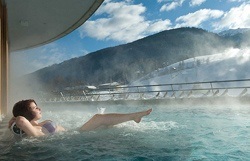 Rich in precious natural elements collected along the route in the heart of the mountains, the waters of Trentino are famous for their healing properties. Iron, carbon dioxide, magnesium, calcium, lithium, selenium, fluorine and sulfur make the waters that arise at high altitudes suitable for treating cardiovascular, respiratory, dermatological and rheumatic diseases .

The Health Circuit in Trentino includes 8 spas, each with specific characteristics, aimed at the care and treatment of various pathologies, scattered throughout the territory, in natural environments of great beauty. To the rare virtues of the waters is added the medicinal heritage of herbs and medicinal plants from the Trentino woods, ancient remedies that allow you to heal yourself in a natural and effective way, finding a new form of well-being.

The Terme Dolomia are located in Pozza di Fassa, surrounded by the splendid backdrop of the Monzoni Group, from which gushes the only sulfur spring in Trentino, known since ancient times. The waters, rich in sulphate, calcium, magnesium and fluorine, are indicated for the treatment of gastrointestinal, respiratory, circulatory and osteoarticular disorders.

In Valsugana there are the Terme di Levico and Vetriolo , particularly loved in the Habsburg era by the Central European nobility. Classified as arsenical - ferruginous, these thermal waters produce a sedative action on the nervous system with antioxidant properties. They treat respiratory, circulatory, dermatological and musculoskeletal diseases.

Built in the middle of the Belle Epoque, the Casa di Salute Raphael is today an elegant 4-star Grand Hotel in Roncegno. It offers a series of therapies particularly indicated for the treatment of debilitating states and convalescence, or for the treatment of chronic diseases, immune weaknesses and allergies. Ferruginous arsenic water has rebalancing virtues and is used for homeopathic, phytotherapeutic and anthroposophic treatments.

Arnica, St. John's wort, dandelion and pulsatilla are some of the medical herbs of which the Viote basin is rich, on the slopes of Monte Bondone, used at the Terme di Garniga where phytobalneotherapy is performed. The grass baths derive from ancient mountain traditions and are indicated for the treatment of rheumarthropathies. A new Wellness center now enhances the spa.

A skin-friendly water, full of calcium bicarbonate and magnesium, ideal for treating dermatitis, psoriasis and allergies: it is the one that flows at the Terme di Comano , with unique properties in Italy, known since Roman times. Immersed in an oasis of greenery, those of Comano are specialized spas for children and an ideal place to relax and practice healthy physical activity.

“Ferruginous oligometallic type” is the classification given by the water of the Sant'Antonio spring, used at the Terme Val Rendena , located in the center of Caderzone. Its peculiarities make it appropriate for treating diuresis and digestive disorders, but also for the treatment of respiratory diseases.

In the high altitude glaciers of the Stelvio National Park, the water that gushes out at the Terme di Pejo is born , known since 1600 and defined as “almost divine benefit”. There are three thermal springs: the Alpine spring, with low mineral content, light and diuretic; the ancient source, ferruginous, suitable for anemia; the New source, natural effervescent, highly carbonic, with digestive properties.

The water of the Terme di Rabbi was the only one deemed worthy of appearing on the table of the Empress Maria Theresa of Austria. It is one of the richest in free carbon dioxide, ideal for the treatment of circulatory and digestive disorders and rheumatic diseases, as well as in recovery from trauma and fractures.