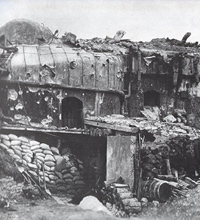 The Forte Sommo Alto di Folgarida, located on the Folgaria plateau , belongs to the seven Austro-Hungarian fortresses located along a stretch of 30 km between the hills of Serranda and Cima Vèzzena , and is a valid and interesting testimony of the fighting that took place at the front Trentino - Veneto during the Great War. The fort was built between 1911 and 1914, in order to connect the Doss, Cherle and Somme forts.

It is possible to reach it via the Coe pass, which is about twenty minutes away on foot. A particularly suitable occasion to visit them is in the summer when the March of the forts takes place, an event that has taken place in these areas since 1999 consisting of different routes with lengths and difficulties of various levels that take place in the area of the three Austro fortresses. -Hungarians.

In the winter months it is possible to visit the Skitour dei forts ski circuit. The fort is characterized, since its construction, by a covering about 2.80 meters thick, which in 1915 reached 3.80 meters following the first fighting. The structure extends over three floors, only one was visible characterized by three revolving steel domes, small caliber cannons, two 10.5 cm howitzers and twenty machine gun positions.

There were also two 380 hl cisterns that supplied water to the fort, consisting of two dynamos with an oil engine and accumulators that supplied electricity. In addition, the fort was surrounded by a series of fences, trenches and minefields.

Forte Belvedere is located at 1,177 m near a rocky hillock close to the Astico Valley . A particularly resistant Fort, in fact, during the bombing of the first days of the conflict it was almost completely unharmed. The first attempted attack was in the eastern sector between Fort Verle and Fort Lusern.

The structure was built between 1908 and 1914 with the primary purpose of controlling Val d'Astico, just below the fort. Of all the fortified structures of the Plateau it is certainly the only one that did not suffer major structural consequences in the war period of the 1930s, at the behest of the fascist regime on the occasion of the Ferro alla Patria campaign.

The fort was pardoned by King Vittorio Emanuele II, who decided to visit the fort famous for its resistance and wished that it at least not be demolished for the memory of future generations. The Orsele family, in the 1960s, bought the fort and decided to transform it into a museum fortress still present today and managed by the Belvedere Gshwent Foundation. Since 2007, Forte Belvedere offers its tourists multimedia systems that narrate the great war through lights, sounds and voices. 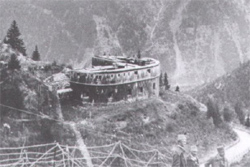 Forte Strino, which dominates the Tonale road , once represented the strategic border between Austria and Italy. This fort is located near the Tonale road, precisely between the town of Vermiglio and the pass of the same name. It is part of the series of fortifications in the Trentino area built by the Austrian General Staff, shortly after the wars of Independence, when Trentino represented the southern border of the Austro-Hungarian Empire.

It belongs to all those forts built by Austria near the borders of Trentino to hinder possible invasions of Italy. It was also fundamental for the First World War, today it houses the Historical Museum of the White War. It is located at 1,538 m near the well-known communication route between Lombardy and Tyrol, built with the aim of blocking the road.

In the Tonale area, two decades before the First World War, other fortified structures were built to reinforce the defense of the Strino barrage. A particular defensive system consisting of a pincer shape that hindered access to the Val di Sole. This structure represents a classic and traditional form of defense for which the compact mass must withstand the impact of the enemy.

Semicircular structure on two floors, following years of neglect it was renovated and delivered to Vermiglio as a testimony of their past. 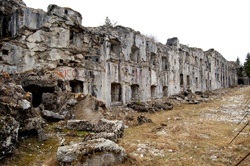 An integral part of the defensive structure located near the Austro-Hungarian border in the years of the First World War, Forte Busa di Verle is located at the Vezzena pass at 1,504 m. It was built in the years between 1907 and 1914, in a strategic location at the behest of the Austro - Hungarians with the Belvedere da Lavarone and the Campo di Luserna , it was part of the most advanced defensive walls near the border between the Kingdom of Italy and the Empire.

The fort obstructed the road leading to the Asiago plateau, it was also the subject of intense bombing by the Italian artillery and was also attacked during the first months of the war by troops of the Alpine infantry. Starting from 1916, on the occasion of the start of the punitive expedition, and with the transfer to the south of the front, it was used as a housing site and as an optical connection point.

The structure of the fort is elongated and divided into four successive jumps following the morphology of the ground, it consists of four revolving domes and a series of armored tunnels, with four 6 cm guns, four 104 mm howitzers, two 80 guns at the Traditor battery and finally 15 machine guns. In the past it housed about 200 artillerymen and 100 sappers under the command of Lieutenant Giebermann and later Lieutenant Julius Papak, towards the 1930s it was sold to the Municipality of Levitico.