Plateau of Folgaria, Lavarone and Luserna 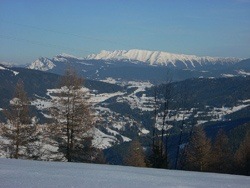 Folgaria, Lavarone and Luserna are among the main localities of these areas that house three different communities that for many years have handed down unique traditions throughout the Alps. Cimbrian is still spoken in Luserna today, an ancient German language that attests to the German-Cimbrian colonization of the X-XIII century. The Magnificent Community of Folgaria which is the result of the autonomy of the rural communities and Lavarone as evidence of the many small towns located on the plateau of the same name around the clear lake.

The Plateaus are an ideal place for those who want to practice outdoor sports during their holidays. In fact, every year during the summer, inaugurated by the Marcia dei Forti, a non-competitive competition takes place that attracts many runners.

This area also offers you the opportunity to undertake many excursions of different kinds and difficulties, on foot, on horseback, by mountain bike, but also to practice sport climbing, free flight and archery. The Nordic Walking Park is an area characterized by 17 paths, 104 km long spread over 105 square km of territory.

A particularly important moment for competitive sport is the 100 km long mountain bike race of the Forts, the Olympic Triathlon in Lavarone, the Gran Bike in Folgaria and the Folgaria Megabike.

It is the Skitour dei Forti, a ski route in the vast Trentino highlands, which attracts particular interest in this area by combining the beauty of the truest mountain with the convenience of easy access from anywhere. Folgaria and Lavarone are located 20 km from the motorway exits located in the north Rovereto and Trento center of the A22 del Brennero and it is also possible to reach them from the A31 of the Valdastico from Piovene Rocchette.

With Skitour dei Forti you can enjoy quality skiing thanks to the 80 km of slopes of varying difficulty, from green to black, formed among the testimonies of the fortifications of the Great War. 32 state-of-the-art ski lifts that quickly take you to altitude. A place particularly suitable for families and children thanks to the possibility of learning skiing. Here you will find a mild climate, never too cold, and the sun persists at the perfectly snow-covered slopes.

At the plateaus it is also possible to enjoy regenerating walks with snowshoes, snowshoes, the term of the place, but also fun alternatives to skiing, such as sled lifts and skating in the Palaghiaccio-Palafolgaria.